First, I think I was a little over the top in my last post. Aseigo took me to task on vaporware. It ain't since we are running it. I repent in dust and ashes.

I'm now running KDevelop. If you want to build it, you need to start with kdevplatform, the kdevelop. I'll note any issues I have with it. The project handling is much better than the previous version, actually prompting it's use :). So far so good.

I noticed an odd glitch with KRunner. I haven't looked for Konversation, so I don't know if it's available for KDE4 yet. Kopete doesn't seem to have IRC support, at least with my setup. So I'm running a kde3 version of Konversation. The menu doesn't show (again, in my setup at least) any kde3 apps, so I start KRunner with alt-f2, type in the path and hit enter. Konversation runs, but I get an error from krunner saying it couldn't find it. Hmmm.

I turned the exploding windows effects off by editing the .kde/share/config/kwinrc file by hand. The fading out windows thingy is next to go. The taskbar plasmoid with pop up stuff becomes obtrusive after a while. Especially if it doesn't disappear right a way.

To ease the pain in the neck of building all the kde modules, I wrote a perl script that goes through all the PKGBUILD's, builds and installs them. It's cranking away slowly as I write. Speaking of pain in the neck, I woke up with a nasty one this morning. Still stiff and sore. Nothing staring at a computer screen won't make worse.

To Build or Not To Build

I build therefore I am.

I appreciate the pointers to the kdemod KDE4 packages and PKGBUILD's. I prefer to maintain my own. It helps me get to know a system if I have to build it, and allows me to keep as up to date as I wish, and easily revert if required.

Speaking of which, Konqueror now starts from the menu. Svn revision 795948.

I feel I need to get something off my chest. My expectations for KDE 4 series are realistic. It is not ready, but will probably get more and more usable and useful as time goes on. There are some very interesting, may I say even exciting stuff being done. Qt 4 series has some very nice ways of doing things that I enjoy working with. Technology is fine. What really bothered me over the last year or so was the attempt to market KDE4. Everything that I like about free software was assaulted. Attempts to control the message, to spin, to pull the vaporware trick out of the hat created a feeling of revulsion. I knew what state the code was in. I followed the discussions on IRC where fundamental parts weren't working or ready. Nothing wrong with that. But trying to portray it as something it wasn't made me question my desire to be attached to such an effort. But, patience is a virtue. Marketing is meaningless when it's not attached to production. And thank goodness, it isn't in free software, it isn't in KDE.

I would be perfectly happy with a truthful message, something like "All software sucks. We suck less. Sometimes."

KDE 4 Plus and Minus

I spend most of my time at my desktop in few apps. Konqueror, KDevelop, KMail, Konversation for irc, Konsole, Amarok. Throw in a video player, usually mplayer. On my Eeepc, Vim in Konsole as editor, Konqueror. The hardware integration is important in both, using the media capabilities of Solid for mounting SD cards and backup partitions.

I loaded KMail (svn revision 794573), set up the accounts, and everything worked as expected. Essentially the same experience as KDE 3.5, at least from a cursory examination. The existing setup for spam and filters worked as expected. I'm very interested in exploring Akanodi.

Konsole has changed quite a bit. The configuration is simplified, although accessing the configuration is a matter of trying menu items until something useful shows up. The configuration dialog didn't size to the Eeepc screen and required the alt-leftmousebutton treatment to get to the OK button. One thing I miss is the button for creating a new tab. It was the most used control element in Konsole 3.5x. At least for me.

I loaded KDevelop from svn. It didn't recognize my existing projects. There may be a feature that does, but I didn't run across it. I didn't get very far in the testing as it crashed. I'll do a bit more testing to see if it's ready to use.

Oh, I didn't mention that Qt4.4RC1 is installed.

I used the Suse Kickoff menu for a while. I liked it, especially the easily available search capabilities, and the favorites. Kdemod had a setup which included Kickoff and beagle, but it is no longer maintained. I was forced kicking and screaming back into the old KMenu, which is painfully broken. The new menu setup in KDE4 is in some ways better than Kickoff. The search works well, Favorites is nice, the hierarchical menu setup works well. The difficult to control mousing in Kickoff is much better in KDE4. There seem to be two types of people. Those who like it and those who don't. One thing I really liked about Kickoff is the access to beagle search. I'm not sure if KDE4 menu (whatever it is called) does, at least here it doesn't return any results. I'm hoping Strigi ends up better than beagle. It is somewhat disconcerting when the beagle indexes are bigger than the indexed data. I ended up disabling it for that reason.

Hmmm. Looking at the Plasma widget gizmo at the top left of the screen, it reminded me of something. 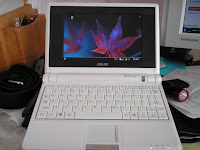 I've decided to fill the large gap in my blogging with descriptions of my experiences with KDE4.

I've been building KDE 4 from svn for a while, testing from time to time to see if it could be used. The answer was negative until recently. Most of what I want has stabilized enough to become my working desktop. I use Arch Linux as a distibution, and have built PKGBUILD's for all the major modules. The build scripts are here.

My first test was to install it on my Eeepc. I was using kdemod 3.5 series, which worked fine. But I wanted to see if KDE4 was usable and how resource intensive it is. Konqueror works, the taskbar can be shrunk enough to be possible, and there is a reasonable working plasmoid for battery power monitoring. No crashes so far. I installed the kdesupport modules, kdelibs, kdepimlibs and kdebase. Startup is quick, shutdown is about as slow as kde 3. If the machine shuts down abnormally, ie. not through the Kde menu, any configuration changes seem to be lost and I needed to delete the plasma configurations in .kde to get it to start again. Once the configuration is saved by a shutdown, further abnormal halts don't seem to cause any problem. This is based on svn revision 792413.

This gave me confidence to try the it on my desktop which is used differently. There have been a few issues, some almost show stoppers. My setup is at svn revision 795172. Konqueror won't start from the menu, and top tells me I have a konqueror --preload instance that is taking 95% cpu. If I start from a console, it loads and runs fine. Every so often nsplugin crashes, and on some pages the cpu usage spikes. It works well enough most of the time. I'm typing this in Firefox because Konqueror locked when trying to insert an image.

The desktop effects are neat for a short while, but for some reason the individual ones can't be shut off. I haven't tried editing the configuration file yet, and I probably will turn them all off. They work. Great.

Most desktop items are profoundly rudimentary in usage. Barely useful. These will no doubt improve with time.

I have used Amarok as a podcast collector, and use it to transfer to my mtp based MP3 player. This isn't working in Amarok 4 yet.